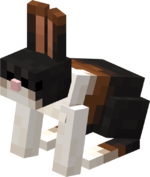 The Harelequin Rabbit is a passive mob and a variant of the rabbit found only in Minecraft Earth.

Harelequin rabbits are a variant of the rabbit with three prominent colors, which makes it different to the normal rabbit. Their head is black with a white muzzle, and brownish tips on their ears. Their upper half is white, while their lower half is black, separated by a brown stripe. Their feet end in white tips.

Similar to ordinary rabbits, harelequin rabbits have the same AI behavior, wandering aimlessly, avoiding lava and cliffs that are enough to cause fall damage.