This page would benefit from the addition of isometric renders.
Please remove this notice once you've added suitable isometric renders to the article.
The specific instructions are: Official in-game render (not the render created by Manekai Nosmirc)
Bouldering Zombie 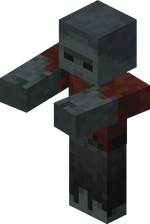 The Bouldering Zombie is a gray-skinned variant of the zombie capable of climbing up blocks found only in Minecraft Earth.

The Bouldering Zombie is a gray variant of the zombie capable of climbing up blocks like a spider. Unlike normal zombies, they possess dark stone-colored skin, a dark greyish head, a more serious expression and face, and have slightly bigger arms, with them being slightly wide, and its seen to have closed fists. It wears a leather shirt and dark grey pants.

Bouldering zombies are rare mob drops that can only be obtained from Rare and Epic Adventure Chests. It can also be obtained as a reward in Season 15.

Bouldering zombies act like normal zombies in terms of damage and behavior, but are capable of scaling up blocks like a spider. This behavior is triggered when it sees a player above blocks, where it then proceeds to climb blocks and then attack the player.

When killed, the Bouldering Zombie can drop: