An adventure beacon in Minecraft Earth.

An adventure is a location on the map in Minecraft Earth where one or more players can have a survival-mode adventure. In an adventure, players can fight mobs, collect additional resources that are unavailable with tappables, and collect rewards.

An adventure appears on the map as a beacon pointing into the sky. A bright outline surrounds the adventure icon when the player has approached to within the player's tappable radius.

When an adventure appears, it persists on the map typically for 7 minutes. Some locations on the map consistently have adventures appearing on them continuously, and other locations have adventures appearing sporadically. After an adventure completes (either by the time expiring, the players dying, or the player exiting manually), a new adventure appears at the same location after a delay. The delay duration ranges from less than a minute to several minutes, depending on the location.

Upon tapping on the adventure location, a screen appears showing information about the adventure. Icons at the top can be tapped to learn:

A shield-shaped icon at the lower right allows the player to give feedback about whether the adventure location is safe and appropriate.

Tapping on the hotbar lets the player choose which items from the inventory are to be available in the hotbar when the adventure begins. Any items placed here are lost if the player is killed during the adventure. A player is expected to have crafted the proper tools before entering an adventure. A pickaxe is needed for mining some stone blocks (a stone pickaxe is required for harvesting iron ore), a sword is useful for attacking hostile mobs, and an axe is most efficient for breaking wood items. Food is needed to restore health during an adventure if attacked by mobs.

If the player's camera aims at the exact GPS location of the adventure, a sign appears to indicate the location before placing down the adventure buildplate.

Tapping the Play button activates the device's camera, with the game's graphics overlayed on the real-world image on the screen. The player is prompted to place a build plate at a safe location in which to play the adventure.

Underground and above-ground structures are generated for the build plate. Most adventures include some structural features (such as cobblestone, grass, fences) along with animals at ground level and above, although some adventures appear as a hole in the ground. Hostile mobs can appear above-ground or underground.

Dirt, gravel, sand, wood, leaves, torches, flowers, and other plants can be collected without tools, by tapping on the "punch" icon and then hitting the desired object. Mining this way takes a similar amount of time as bare-handed mining in the regular Minecraft desktop or console game. The proper tools harvest faster (for example, using an axe on wood is much quicker than punching it), and harder materials must be mined with a pickaxe.

Empty slots in the hotbar fill up first, and subsequent blocks and items are placed in the player's backpack inventory, which is available only during adventures, and is lost if the player dies.

Many adventures allow the player to dig underground beyond the surface boundary of the build plate. Digging underground can reveal useful and rare blocks, as well as fences, planks, rails, torches, coal ore, and various stone blocks. Iron ore is rare, typically appearing in veins of 1–2 blocks in a small fraction of adventures; 3–4 iron ore blocks are extremely rare. A stone pickaxe is required for mining iron ore and lapis lazuli ore (also rare), and an iron pickaxe is required for more exotic minerals such as gold ore, redstone ore, and diamond ore.

It is not usually possible to climb structures or descend into mines, although a player can crouch or stand tall to change elevation somewhat, which is useful for seeing, digging, and attacking under the surface boundary of the adventure's build plate. However, if the adventure is placed in a location where you actually can go up or down several feet, such as inside a multi-level house or a treehouse, then you can go further up/down in the adventure, so long as your device tracks your movement appropriately.

A player can dig down to reveal a pool of lava and stand in mid-air over the pool of lava without harm; however, the player catches fire (and takes damage but does not die) from walking through lava on or above ground level. 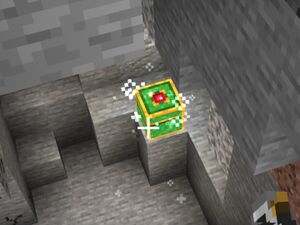 An adventure chest appears in an adventure when all hostile mobs have been eliminated.

Hostile mobs can appear above ground, but most reveal themselves when digging underground. The bearings toward hostile mobs are indicated by icons on the edges of the screen. Because a player has a longer reach with weapons and tools than in regular Minecraft, a melee weapon is sufficient for attacking mobs in the farthest corners of the adventure volume.

When all hostile mobs have been eliminated, an Adventure Chest may appear somewhere in the adventure. Breaking it gives all participating players a couple of rare items, which can include a minecart, glazed terracotta, or even a block of iron. The chest may not be immediately visible; the player may have to mine the adventure before seeing it.

In Minecraft Earth, armor cannot be crafted and cannot be worn, therefore hostile mobs can easily kill the player in just a few hits. The player must resort to tactics for defense, such as hiding behind structures or crouching beyond the adventure surface boundary, placing barriers between the player and mobs using building materials in the hotbar, and using the mob bearing icons to prepare attacks.

The player's health appears as a horizontal bar at the top left of the screen. Attacks from mobs reduce a player's health. A player can restore health by eating food. If health is dangerously low, a useful tactic is to retreat from sight of the mobs, eat food to regain health, and then return to fight some more. Getting killed during an adventure causes all items in the hotbar, and all items collected during the adventure, to be lost forever; therefore, it is critical for the player to monitor health while hostile mobs are present. 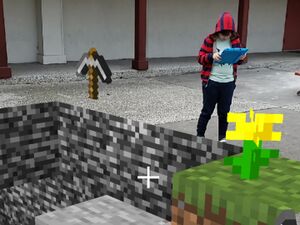 Another player appears in an adventure with the held tool floating beside the player.

Multiple players can participate in the same adventure. Before an adventure begins, an icon at the top can be tapped to learn if anyone else has already been to the adventure, or is currently playing it.

During the adventure, other players are represented in the game by the tools they are holding. A player's view of another player includes both the real-world image of the player as well as the tool that player is holding.

Players cannot drop their own items so that other players can pick them up.[verify]