This article is a work in progress.
Please help in the creation of this article by expanding or improving it.
The talk page may contain suggestions.
Zombie 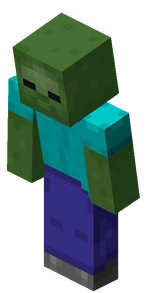 Zombies are common undead hostile mobs that appear in most levels in Minecraft Dungeons. They appear as green-skinned humanoids with blue clothes, as they do in the base game. They have several variants with scaling stats, including an armored version.

Zombies also spawn when night falls, regardless of location, when at least one player dies in multiplayer.

Zombies are hostile and attack players on sight, walking slowly toward the player until in close range, at which point they attack by raising their hands and swooping them down.