This page describes content that is a part of the Creeping Winter DLC.
Wretched Wraith 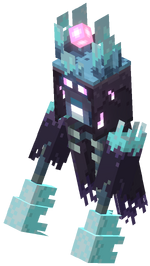 The Wretched Wraith is an unusually large or oversized wraith with small purple markings around its tattered hood, glowing eyes and mouth, ice-tipped hands, shoulders, and an ice crown, with a shard of the Orb of Dominance floating above it.

The Wretched Wraith was a wraith that possibly lived on the Lone Fortress, a fortress located on the island where the story of Creeping Winter takes the place. When the Shard of the Orb came, it took control of the wraith, turning it into a colder and more powerful wraith that if the heroes do not defeat it, overworld would become nothing but ice and snow. When the player reaches the end of the Lone Fortress, they will come across an ice crown with the shard on a pedestal. If they try to take it, the Wretched Wraith will rise up and grab the crown. It will then try to fend the player off. Once it is defeated, the orb inside its crown will disappear. When the Wraith picks up the crown and shakes it, after realizing that it has no shard, it screams as beams of light enter it, then disappears. The crown then falls to the ground and cannot be interacted with.

The Wretched Wraith has 4 different attacks. In between them, it randomly hovers and teleports around the arena.

The Wretched Wraith moves one of its arms and simply fires a fast-moving icy projectile towards the player.

If the player comes within melee range of the Wretched Wraith, it will spread it's arms out, dealing melee damage and knocking them back, then it teleports away.

The Wretched Wraith teleports to one side of the arena and fires rows of many pink projectiles (5 for spread and 8 for cone per second) which cover both sides of the arena, and also projectiles in the middle. After doing this attack for 10 seconds, the wraith may become stunned for 5 seconds and won't move or attack. Its defense is also reduced by 60% during this.