This Minecraft Dungeons article is a stub.
You can help by expanding it.
Wraith 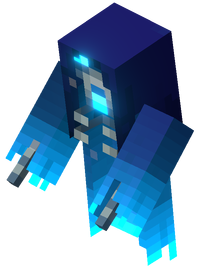 Wraiths are undead hostile mobs found in certain levels in Minecraft Dungeons. The Wretched Wraith is another variant of the Wraith found in the Creeping Winter DLC.

The Wraith appears to be an undead ghost-like mob that resembles a skeleton but composed of a skull and a small rib cage. It wears a blue hood over itself that glows and has two small hands.

The Wraith attacks the player by creating 3 by 3 area of scorching blue flames on the ground under the player that burn the player and cause damage over time.

Stunning the Wraith while it is attacking allows the player to cancel its attack.

The Wraith can teleport away from players if they get too close, they are immune to their own blue flames and enchanted fire from other mobs, they follow players so they never lose their target and if on low health they will teleport away.