This page describes content that is a part of the Jungle Awakens DLC.
Whisperer 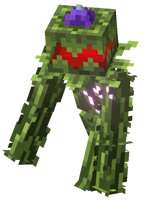 The Whisperer is a plant-like hostile mob found in Minecraft Dungeons, in the Jungle Awakens DLC. They act almost similar to the Geomancer in terms of attack style, such as summoning Vines in a square pattern surrounding the player.

The Whisperer has 4 attacks.

At close range, it uses its long arms to hit the player.

A rare behavior. When the Whisperer stretches its arms forward and closes its palms. It summons a small circle vine trap and the trap clamps the player for few seconds and disappears later. Similar to the spider's web. This entangle Vine is unattackable.

This page would benefit from the addition of more sounds.
Please remove this notice once you've added suitable sounds to the article. The specific instructions are: