This article is a work in progress.
Please help in the creation of this article by expanding or improving it.
The talk page may contain suggestions.
Vindicator 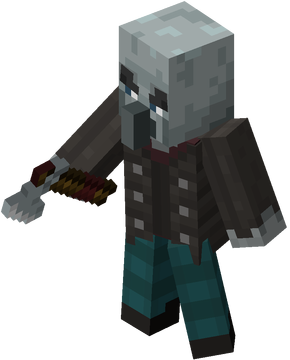 Vindicators are common illagers and hostile mobs equipped with axes found on most levels in Minecraft Dungeons.

Similar to the original vindicator with some texture change. But they don't have arm close animation like original game.

Vindicators attack the player on sight. They usually move faster than other melee mobs. If it sees a player, it charges and attacks with an axe.

Although vindicator have high move speed, it have more delay than other melee mobs when it attack. Their attack speed slightly slower than zombie but deal more damage and tougher.