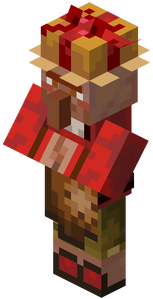 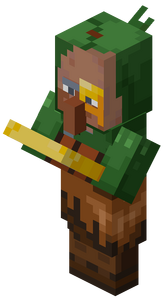 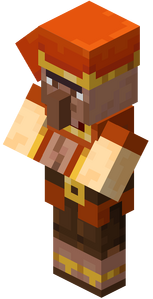 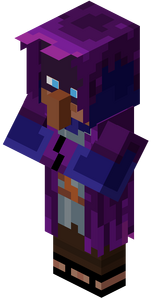 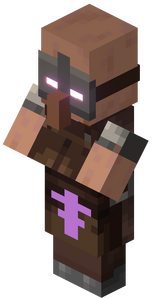 Villagers are non-attackable mobs that act as NPCs in the main story of Minecraft Dungeons.

In the main story of Minecraft Dungeons, they were responsible for shunning the Arch-Illager from their village in the Squid Coast because of the Arch-Illager's barbaric culture, as he was an illager. As an act of revenge, they were kidnapped, burned out of their homes, and taken hostage by the Illager Army created by the Arch-Illager, from there, they are being forced to work for them as slaves, as evidenced within the Redstone Mines.

Villagers can be found imprisoned in fence gates in the Creeper Woods, where they are being shipped for labor. They can be seen later in the intro for Pumpkin Pastures in the last hearth, and being forced to work for the Illagers in the Redstone Mines. Two villagers can also be seen in the intro for Fiery Forge, where they are being followed by a Vindicator. Statues of Villagers can also be found in the Creepy Crypt though they are a little hard to spot. And statues in the Jungle Awakens levels, particularly in the Overgrown Temple, and one on the left arm of the Jungle Abomination. They can also be found imprisoned in a secret place in the Frosted Fjord.

This section may need cleanup to comply with the style guide. [discuss]
Please help the Minecraft Wiki clean up this page if you can.
The specific problem is: Upload the sounds file from game data. There are too much and please move certain sound files to certain Villagers like the Wandering Trader.