This article is a work in progress.
Please help in the creation of this article by expanding or improving it.
The talk page may contain suggestions.
Village Merchant 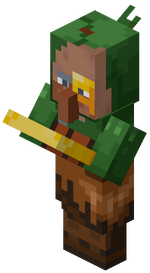 The Village Merchant wears a green robe with a hood that covers the upper-right side of its forehead. Its hood has sewn lines around it. It is also seen wearing a monocle, and seen holding an object used to find hidden details in maps. It also wears a leather belt around its waist and dark brown pants and boots. Unlike normal villagers, this merchant possesses light grey eyes and monobrow.

The Village Merchant sells common and rare items at a rather cheap price, but it can be somewhat expensive if they are rare artifacts, and this merchant never sells uniques. To unlock the rest of the slots in his stall, the player must save a certain number of villagers and the slot will be unlocked. To unlock the Village Merchant himself, the player must find and free him in a specific location within the Creeper Woods.

Issues relating to "Village Merchant" are maintained on the bug tracker. Report issues there.

This page would benefit from the addition of more images.
Please remove this notice once you've added suitable images to the article.
The specific instructions are: Image of the Village Merchant in the Creeper Woods.