This page describes content that is a part of the Howling Peaks DLC.
Tempest Golem 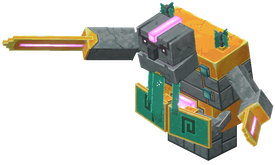 The Tempest Golem is a boss mob in the Minecraft Dungeons DLC Howling Peaks.

The Tempest Golem is a colossal golem-like mob. It is made of stone, has a golden back, and has windmill-like poles. Its head is square with a purple stud on its forehead, small eyes, and a big jaw. Jade banners can be seen hanging below the Golem's chin, and its front body possesses intricate etched lines and 4 jade blocks on each end of its body. Both of its arms possess giant gold swords with purple stripes going down the middle, plus its forearms are larger than its upper arms. The Tempest Golem also has a large purple button on its chest, which is covered by two jade-colored panels with a swirl symbol on them. These two panels are considered its shield, and it protects its large button with them, where the shard could be located. The golem appears to be 10 to 12 blocks tall (20 to 24 blocks tall in the artwork), which would make it the tallest boss or mob in the game.

The golem sits in the Gale sanctum building a huge storm that will kill all life in the overworld, which the player must stop. After making it to the Tempest chamber where the tempest golem resides, the player activates the 2 wind pillars, which awakens the golem. After deactivating the pillars and damaging the golem several times, the shard will shatter, therefore destroying the golem, stopping the building storm and ending the Howling Peaks story.

The Tempest Golem never moves from where it spawned, always remaining immobile similar to the Corrupted Cauldron. It has 4 different attacks. Additionally, attacking the stone pillars to deactivate the arms causes the Tempest Golem to become stunned, unable to attack or move for a few seconds. It also loses defense while stunned.

If a player goes to either side of the Tempest Golem, it will smash the ground with one of it's sword arms, creating a small shockwave around it and deal some or a bit of damage to the player.

If a player goes in front of the Tempest Golem's body, it will quickly open its two shield panels, dealing little damage and knocking them away. It then closes them shortly after.

Occasionally, the Tempest Golem summons a lightning bolt to attack a player. This is signified by a blue square on the ground which follows the player for 5 seconds. After 5 seconds, lightning will strike down on that square, dealing heavy damage.

After the Tempest Golem is stunned and gets back up, two random Squall Golems from the back of the area will awaken and attack the player.