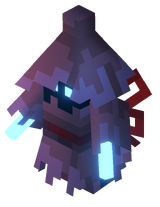 The Soul Wizard is a passive mob that can be summoned with the Soul Lantern, found only in Minecraft Dungeons.

The Soul Wizard is a rather small mob about the size of a vex or possibly smaller. Its body is covered in purple tattered clothing and wears a hat that resembles the upper part of a lantern. Its hands and face are only visible, with its hands and eyes seen glowing bright blue. On its waist is a red ribbon binding its clothing together. The name wizard may come from its appearance or perhaps its attack style.

The Soul Wizard can be summoned using the Soul Lantern.

Upon being summoned, the Soul Wizard will follow the player and attack mobs that startle it. When the Soul Wizard is defeated, it will disappear with a shattering sound heard.

Similar to the Bees, the Soul Wizard has a limited survival time and will automatically disappear after a while, and the player needs to use the Soul Lantern to summon again.

This page would benefit from the addition of more sounds.
Please remove this notice once you've added suitable sounds to the article. The specific instructions are: the sound of the soul wizards death.

Issues relating to "Soul Wizard" are maintained on the bug tracker. Report issues there.