This article may need cleanup to comply with the style guide. [discuss]
Please help the Minecraft Wiki clean up this page if you can.
The talk page may contain suggestions.
Soggy Cave 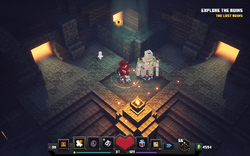 The Soggy Cave is a secret location in Minecraft Dungeons. It can be unlocked by finding it in Soggy Swamp.

The Soggy Cave is a small cave located under the Soggy Swamp consisting of an outdoor area along with a small indoor area that has five doors and three rooms. Two of the three rooms have arena battles and a puzzle and lead to the two other doors. The final room contains an Obsidian Chest.

The mysterious cave is full of doorways, each of which leads to a different area of the swamp. The doorways need to be entered in the correct order to visit each area because they are all connected by a confusing series of gateways. In some areas, the heroes need to complete arena battles before progressing, while others pose button puzzles to solve before gaining valuable rewards.

The redstone combination puzzle in the level has 4 buttons, and the goal is to transmit the redstone line from the left across the 5 blocks attached to pistons to the right. Doing so unlocks the rest of the level. To solve this puzzle, it's important to know what each of these 4 buttons do. The leftmost button shifts any blocks that are up one space to the left, while the rightmost button shifts them to the right. The middle left button raises or lowers the 2nd and 4th blocks, and the 3rd button inverts the state of the 2nd, 3rd, and 4th blocks.

Some people recommend just spamming all four buttons in a random order until the redstone power is transmitted from the left across the blocks attached to pistons to the right. But the 2 piston puzzle is easier to complete. Its combination is as follows: