This page is a work in progress.
Please help in the creation of this article by expanding or improving this page.
The talk page may contain suggestions.
Skeleton 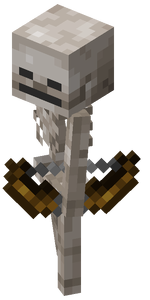 Skeletons are common undead hostile mobs found in all levels in Minecraft Dungeons except for the Obsidian Pinnacle.

Skeletons can be found commonly in the Squid Coast, the Creeper Woods, the Creepy Crypt, Soggy Swamp, Soggy Cave, the Pumpkin Pastures, the Arch Haven, the Redstone Mines, the Fiery Forge, Cacti Canyon, the Desert Temple, the Lower Temple, the Highblock Halls (Outside), the Underhalls, the Dingy Jungle, the Overgrown Temple and the Panda Plateau. It can also be summoned by the Necromancer.

Skeletons in Minecraft Dungeons are different in color unlike their original counterparts, with their bones being marble-colored and parts near its legs or joints being darker.

Skeletons harm the player by shooting arrows with bows from a distance. They flee when the player gets near them.

Skeletons also have a rare behavior when idle. They will spin their skull very fast like they are playing their heads. [needs testing] They have a sounds file named "Novelty Spin" which plays when this behavior occurs.