This page would benefit from the addition of isometric renders.
Please remove this notice once you've added suitable isometric renders to the article.
The specific instructions are: This render doesn't match up with original game. The problem is:
Royal Guard 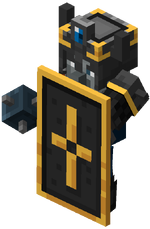 The Royal Guard is a heavily armored variant of the vindicator that wields a shield and a mace found in Minecraft Dungeons.

The Royal Guard is a Vindicator wearing Dark Armor but with yellow outlines on the helmet and sleeves, and carries a shield with a yellow cross-like pattern, and a mace.

The Royal Guard only spawns within the Highblock Halls, the Obsidian Pinnacle, and the Lone Fortress. It can also be found rarely in the Underhalls.

The Royal Guard is usually protected by their heavy armor and their shield and mace. The shield should be destroyed first, so the player can damage it.

The Royal Guard is slower than most mobs, but extremely strong, capable of dealing heavy damage to the player. The Royal Guards are the praetorian guards of the Arch-Illager and they protect him at all costs. Their health pool is the same as the armored vindicator (diamond not gold) but their melee damage is slightly less. They still can be stunned by normal attack.

In this sense, they are the illager equivalent of Skeleton Vanguards, except they use maces instead of glaives.

This page would benefit from the addition of more sounds.
Please remove this notice once you've added suitable sounds to the article. The specific instructions are: