From Minecraft Wiki
Jump to: navigation, search
Not to be confused with Redstone Golem or Mooshroom Monstrosity.

This article is a work in progress.
Please help in the creation of this article by expanding or improving it.
The talk page may contain suggestions.
Notes: Health from the apocalypse + dificulties.
Redstone Monstrosity 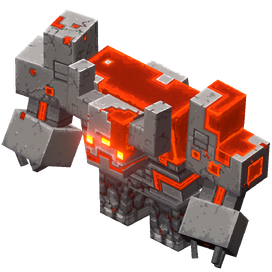 The Redstone Monstrosity appears to be a hulking, mechanical entity made of stone and redstone patches. It appears to have multiple cracks within the body and red outlines within its torso. It has three glowing yellow eyes with the third one on its forehead and a red jaw. It possesses two large horns on its head. The Mooshroom Monstrosity and Redstone Golem are variants of this entity. It is about 5.4 blocks tall (7.2 blocks tall in the 1.6.0.0 trailer update).

The Redstone Monstrosity has three attacks. While not attacking, it slowly walks toward the player. It is the second slowest mob in the game, after the Jungle Abomination.

The Redstone Monstrosity smashes both of its fists on the ground, creating a large 4-block shockwave that deals knockback and damage (48 to 144 damage on Default) to any entities in its radius. This attack is the one used most often when a player gets in range.

The Redstone Monstrosity touches the ground with both fists as the redstone on its body glows. 12 fissures form around the boss, each spawning a Redstone Cube that attacks the player. This attack occurs every 20 seconds.

The Redstone Monstrosity leans back and spits out 8 small fireballs from its mouth. When a fireball touches the ground, it explodes in a small radius (14 to 42 damage per fireball on Default). This attack is used mostly when there are no players close to the Monstrosity, and is more powerful than its melee attack (30%x8=240% range total damage vs 100% melee damage).

(In other versions, this may not be 100% accurate)

This page would benefit from the addition of more sounds.
Please remove this notice once you've added suitable sounds to the article. The specific instructions are: when redstone monstrosity smashes the ground (Smash attack)

In the opening cinematic, as well as the Minecraft Dungeons banner, along with all the illagers who notably have switched weapons partially, another creature known as the Redstone Golem can be seen. It is a bit more stone-like, however, and bears no horns or mouth, two somewhat larger, slime-like eyes, more cracks, and is only about 66% the size (3.6 blocks). It also appears to be thinner and weaker.