From Minecraft Wiki
Jump to: navigation, search
Not to be confused with Redstone Monstrosity.
Redstone Golem 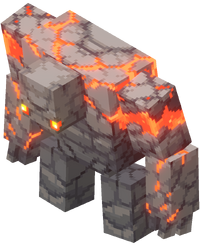 The Redstone Golem is a miniboss mob found in various levels in Minecraft Dungeons. They were the first mobs created by the Orb of Dominance even before Archie took hold of the Orb, as there are some unactivated ones already in the cave where the Orb is located. The music soundtrack of the redstone golem is the exact same as the Redstone Monstrosity's soundtrack when they are spawned as a mini-boss.

The Redstone Golem is a smaller and weaker version of the Redstone Monstrosity, with more prominent cracks, no horns or visible mouth, and two slime-like eyes. There is also a block of redstone attached to its back and two inside both its upper arms. It is made from cobblestone and redstone blocks, with redstone dust wiring it. When aside other Illagers, this boss becomes difficult to defeat fast.

A Redstone Golem appears as the main boss of Redstone Mines. Afterward, they appear as mini-bosses in the Fiery Forge, Obsidian Pinnacle, Highblock Halls (Adventure), Redstone Mines (Adventure) and rarely in other levels on Apocalypse difficulty. It can also be rarely be summoned by the Arch-Illager during the battle with him. A few unactivated Redstone Golems appear in the intro cinematic.A redstone golem is also seen attacking iron golems in the cinematic as well.

The Redstone Golem has two attacks. While not attacking, it runs toward a player, stomping its feet loudly, and alerting players. The Redstone Golem's speed almost matches that of the player.

When the player gets in range, it swings one of its arms across to attack, dealing heavy damage and high knockback.

The Redstone Golem smashes into the ground with both arms, causing 14 mines to appear randomly around the golem. If a player walks over one of these, it detonates in a small radius, dealing immense damage to the target and anyone near. The golem cannot move while using this attack, so players can use this as an opportunity to hit it or to escape. The Redstone Golem does not use this attack on pets, but this attack still damages them if they happen to trigger one of the mines. This happens every 10 seconds after it chases the player. This is its most powerful attack.

The Unbreakable One is an ancient form of the redstone golem, and is presumably much stronger.It's appearance is similar to an enchanted redstone golem. It also has a different health bar, and has a group of enchanted minions.