This page would benefit from the addition of isometric renders.
Please remove this notice once you've added suitable isometric renders to the article.
The specific instructions are: This render doesn't match up with original game. The problem is:
Pillager 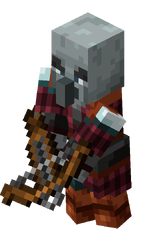 The Pillager is an uncommon illager equipped with a crossbow found in many levels in Minecraft Dungeons.

On Default Difficulty, Pillagers appear in the Redstone Mines, Fiery Forge, Cacti Canyon, Arch Haven, Highblock Halls, Underhalls, and the Obsidian Pinnacle, where they can be summoned by the Arch-Illager in the battle against him. They can also be found in the DLC in the Frosted Fjord, Lone Fortress, and the Lost Settlement.

The Pillager's appearance in Minecraft Dungeons is similar to its regular, default version, except it bears blue eyes instead of the usual green ones it has in the base game.

Pillagers are armed with crossbows and are usually slow-moving, preferring to shoot the player from a distance. However, it deals great pierce damage with a single shot. As similar to skeletons, spiders or geomancers do, pillagers move.

The Armored Pillager's crossbow always have the Piercing enchantment.