From Minecraft Wiki
Jump to: navigation, search
Not to be confused with MCD:Pig.
Piggy Bank 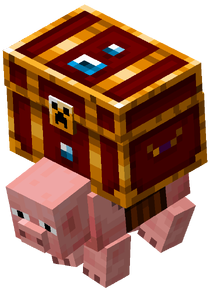 The Piggy Bank, also known as the Loot Pig is a rare passive mob found in Minecraft Dungeons. If attacked by a player, they drops Emeralds and various loot.

The Piggy Bank is a pig that possesses wider eyes and its pupils are in the middle. It carries a fancy chest on its back attached via a strap.

Piggy Banks can spawn in any level except for Squid Coast or ???.

The Piggy Bank, when it appears, stands still, looking somewhat cautiously for players and mobs. When the player gets close, the Piggy Bank tries to flee. When hit by a player, the Piggy Bank widens his eye, then drops emeralds and is stunned for a short time. If the player successfully kills it, it drops more loot. If left alone on screen for long enough, however, the Piggy Bank eventually disappears along with the chest, without dropping loot.

The drops appear only when the Piggy Bank is attacked and killed by a player.

Issues relating to "Piggy Bank" are maintained on the bug tracker. Report issues there.