This page would benefit from the addition of more images.
Please remove this notice once you've added suitable images to the article.
The specific instructions are: Image of the Mystery Merchant in the Pumpkin Pastures.
Mystery Merchant 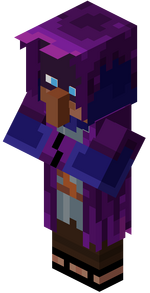 The Mystery Merchant is a merchant found in Minecraft Dungeons. Like other merchants, it has a stall at camp.

The Mystery Merchant wears dark purple robes, with a dark purple hood covering its face. It wears dark purple gloves, with a blue undershirt covered by a white-grey shirt. as well as brown pants and black sandals. Unlike normal Villagers, it possesses light blue eyes. It also has a pet wolf and is seen with a Tasty Bone in its camp stall. Its stall also has a soul in a glass dome, some Soul Lanterns (based on the ones in normal Minecraft), some Potions and two Mushrooms on display at his stall, with one of the mushrooms being a Death Cap Mushroom and the other being a Warped fungus from normal Minecraft.

The Mystery Merchant will sell different crates to the player. These crates are restockable with emeralds, and the amount of slots it has at a time can be increased by defeating enchanted mobs. It is able to sell the player melee crates, ranged crates, artifact crates, armor crates, and mystery crates. To unlock the Mystery Merchant, the player must find and free it in a specific location inside of Pumpkin Pastures.