From Minecraft Wiki
Jump to: navigation, search
Not to be confused with Redstone Monstrosity.

This article is a work in progress.
Please help in the creation of this article by expanding or improving it.
The talk page may contain suggestions.
Notes: Health from the Apocalypse + difficulties and Render with mushrooms, if possible
Mooshroom Monstrosity 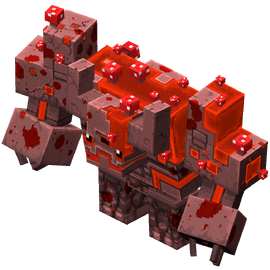 The Mooshroom Monstrosity is a boss mob in Minecraft Dungeons. It appears in the hidden dungeon ??? level as the final boss. It seems to be the remnants of a Redstone Monstrosity somehow reactivated by the mushroom spores after being defeated by the player at the Fiery Forge.

The Mooshroom Monstrosity appears to be a mechanical mob made of stone and redstone patches, as well as mushroom spores sprouting out of the Mooshroom Monstrosity's body. It appears to have multiple cracks within the body and red outlines within its torso. It has two black eyes and a third empty eye socket on its forehead, and a red jaw. This mob is a variation of the Redstone Monstrosity. It is about 5.4 blocks tall.

These attack names are conjectural; official names has not been established.

The Mooshroom Monstrosity smashes both of its fists on the ground, creating a large 4 block shockwave in a radius that does heavy damage to and knocks back any other entities in its range. This attack is the one used most often when a player gets in range.

This page would benefit from the addition of more sounds.
Please remove this notice once you've added suitable sounds to the article. The specific instructions are: when mooshroom monstrosity smashes the ground (basic attack)