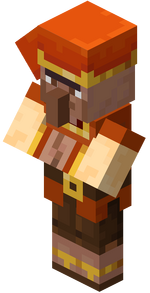 The Luxury Merchant is a merchant in Minecraft Dungeons. It sells gear and artifacts are a much higher level than the player's current Power Level, though it is extremely expensive. He has a chance of selling unique items like the Fighter's Bindings, the Moon Daggers, the Slayer Crossbow, the Winter's Touch, the Titan's Shroud and the Wither Armor. He never sells common items. His trades are like boss drops and Obsidian Chest drops.

The Luxury Merchant is fancy-looking merchant, as evidenced by his stall and his pet Ocelot. He wears an orange shirt with white sleeves with gold stripes ending below the neckline and sleeves. It also wears an orange turban with a golden base. He also wears brown pants with a gold buckle, and also wears sandals with golden straps. Unlike normal Villagers, he possesses brown eyes.

The Luxury Merchant is a merchant that sells pretty good items for very high prices. To unlock the Luxury Merchant himself, you must find and free him in a specific location inside of Cacti Canyon. To unlock the other slots in his stall, the player must defeat a certain number of minibosses like the Enderman, Evoker, Redstone Golem, Skeleton Horseman and the Illusioner