This page is a work in progress.
Please help in the creation of this article by expanding or improving this page.
The talk page may contain suggestions.

There are many different locations to find and explore within the world of Minecraft Dungeons. They are typically unlocked through completing predecessor locations, although in the cases of some levels they are unlocked through secrets, these are know as Secret Levels. Locations are able to be traveled to from the map once players have reached or returned to the Camp. They do not appear on the map until they are unlocked. Due to the nature of how the levels are unlocked, it is entirely possible to skip levels to complete the main story. There are a maximum of 26 playable levels at any given time if you have purchased all of the DLC's and unlocked all of the secret levels, and daily trials.

There are three main things that can be found in a location: Emeralds, Consumables, and permanent objects like Weapons, Armor and Artifacts.

The map of the Overworld in Minecraft Dungeons.

The following main missions and secret missions can be found in the Overworld: 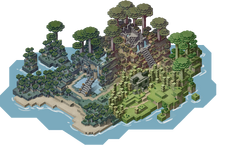 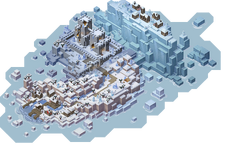