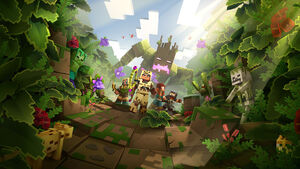 Jungle Awakens is a DLC pack for Minecraft Dungeons, released July 1st, 2020.[1][2] It was the first DLC released for the game.

Jungle Awakens is set in an as yet unnamed tropical island. The island contains many Jungle trees in high abundance. On the west side of the island, a small lake, and what looks to be an offering platform can be spotted. A cave entrance is also visible in this area. To the east is what looks to be a large Panda head built into the side of the terrain. It is likely for the cave entrance to exit out of the panda head, as there is an opening in the mouth. At the top of the island is what appears to be a run-down temple upon a hill, with decorative waterfalls flowing out the sides. A small beach and several islands appear on the island, though most of the details listed do not appear in-game. 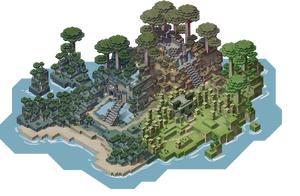 The island on which Jungle Awakens takes place.

These are locations added with the release 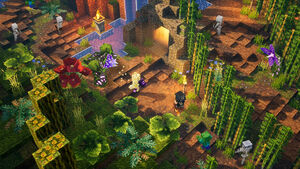 The Orb shard in the Jungle.