This page would benefit from the addition of isometric renders.
Please remove this notice once you've added suitable isometric renders to the article.
The specific instructions are: A bigger HD model of the Abomination for aesthetic purposes.

This page describes content that is a part of the Jungle Awakens DLC.
Jungle Abomination 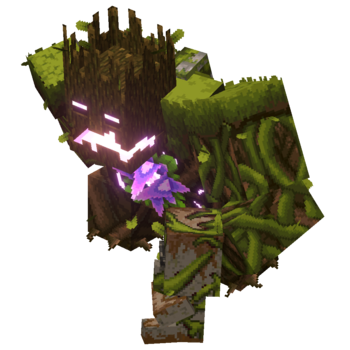 The Jungle Abomination is a boss mob found in Minecraft Dungeons. It is found in the Sun Room within the Overgrown Temple. It is the final boss in Jungle Awakens.

The Jungle Abomination appears to be a hulking beast composed of logs, dirt and stone, and has moss and vines growing on it. Its left arm has what appears to be a Villager statue on the end, bound by its vines, and its right arm is a vine. It has glowing eyes similar to that of an Enderman, as well as its mouth and a large flower on its torso are the same color. It is 7.2 blocks tall.

The Jungle Abomination is the result of the shattered shard of the Orb of Dominance spreading its corrupted magic across a jungle island where the story of Jungle Awakens takes place. The Orb first took control of the island in the form of Quick Growing Vines and Poison-Quill Vines, as noted by the presence of purplish-pink streaks of energy around them. It then created the Jungle Abomination as a result of manipulating its environment, creating a "body" composed of leaves, branches, roots, and other objects. It can use this 'body' to protect itself and grow stronger, which resulted in the Abomination's creation. As a result, the Orb within the Abomination took full control of the island, as noted by the loud roars it emits throughout all levels. Its quest to regain its powers lead to the creation of the Whisperer and the Leapleaf, but these plans were never fulfilled, as it, along with the shard within it was destroyed for once and for all, and the island now recovers from the corruption caused by the Orb.

The Jungle Abomination has 3 different attacks. It is one of the slowest and largest mobs in the game, but does not have the largest health pool. Sometimes, the boss becomes vulnerable for 5 seconds if it takes too much damage, with its defense significantly reduced by 60%.

The Jungle Abomination attempts to crush the player by using its left arm with the Villager statue. The Boss cannot move when using this attack .

This attack involves the Jungle Abomination whipping its vine-like left arm into the ground and 4 to 10 Abomination Vines rise from the ground to attack the player. This attack seems to be used when the abomination falls below half health and deals 40% of the melee's smash per vine.

The Abomination summons 4 Whisperers. When below half health, it can also summon 2 Leapleaves.

The Abomination Vine is the entity summoned by the Jungle Abomination when it uses the Vine Attack, which is only used when it is below half health. These vines behave similar to the quick growing vines, but they are immune to all forms of damage and can do contact damage to the player when they sprout up. The Jungle Abomination usually summons about 8 of these scattered in a large circle around itself, but can do a few other patterns such as just 4 of them in a small square around itself. Where the vines will sprout up from is signified by a brief purple crack coming out of a spot in the ground. They sink back down into the ground after a few seconds.

(please add Default, Adventure and Apocalypse to the Mooshroom Monstrosity, Redstone Golem, Redstone Monstrosity and others)