This article may need cleanup to comply with the style guide. [discuss]
Please help the Minecraft Wiki clean up this page if you can.
The specific problem is: Bow type and explosive arrows.

This page describes content that is a part of the Creeping Winter DLC.
This article is about mini-boss in Minecraft Dungeons. For the unused mob in Java Edition, see Illusioner.
Illusioner 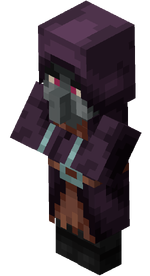 The Illusioner, also known as the Illusionist, is an Illager mini-boss mob found in the Creeping Winter and Howling Peaks DLC for Minecraft Dungeons. When spawned, the Evoker boss soundtrack plays.[1]

The Illusioner is an illager that looks very different from the illusioner from Java Edition. Instead of a blue cloak, it wears a dark purple cloak and hood with dark outlines on the edges. It also has pink eyes, which makes its eyes comparatively brighter than that of the other Illagers. Under its cloak is leather clothing, and it wears a belt with an iron buckle and a leather bag behind it. It also wears dark boots and smaller than the Evoker.

The Illusioner has 3 different attacks. Between attacks, it uses Teleport and Create Duplicates.

These attack names are conjectural; an official name has not been established.

The Illusioner creates several duplicates of itself, similarly to the Nameless One. Unlike their base game counterparts, these duplicates can be killed separately. If no player is nearby when this ability is used, the Illusioner and its duplicates will not appear until a player gets close. When the real Illusioner is attacked or a certain amount of time passes, all the duplicates disappear and new ones appear shortly after.

After teleporting, the real Illusioner will use a random attack, before teleporting and creating more duplicated.

The Illusioner casts 10 seconds of blindness on the players. While blinded, the player's attacks will have a 50% chance to miss and they will emit a black mist over their head.

The Illusioner’s duplicates will constantly fire arrows at the player, dealing a low amount of damage on contact.

The real Illusioner shoots a pink explosive arrow that is similar to the Fireworks Arrow and deals much more damage then the arrows shot by the duplicates.