This page describes content that is a part of the Creeping Winter DLC.
Iceologer 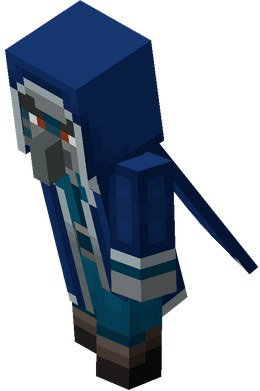 The Iceologer is an illager and a hostile mob found in Minecraft Dungeons. It is one of the new hostile mobs found in the second DLC, Creeping Winter and in the third DLC, Howling Peaks.

Iceologers wander around until they see a player. An Iceologer who spots a player will summon some ice blocks above them that hover for 3 to 5 seconds before falling. The ice blocks will stay directly above the player until they drop. If an ice block hits a player, that player will be stunned for several seconds and slowed for another 5 seconds. They will flee from the player if they are not summoning an ice block. These ice-summoning abilities are similar to the Ice Wand.

The Iceologer is an illager with blue markings on its face. It wears a blue coat with white outlines around the hood and cloak and a cape in the back, it lastly wears light bluish pants with black shoes. Unlike normal illagers, the Iceologer possesses red-brown eyes, which differs it from most illagers who have green or blue eyes.