From Minecraft Wiki
Jump to: navigation, search
Heart of Ender 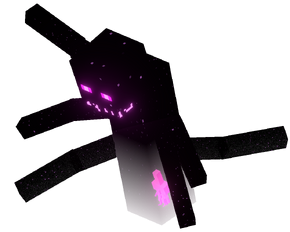 The Heart of Ender, otherwise known as the Arch-Visage and the Arch-Vessel is the final boss of Minecraft Dungeons. It appears in the Obsidian Pinnacle after defeating the Arch-Illager. It is the last boss in the main game, not counting the DLC bosses or the Mooshroom Monstrosity.

After the Arch-Illager is defeated, he is drawn towards the Orb of Dominance, after which the Heart of Ender manifests itself.

The Heart of Ender is a large and very tall hostile mob that resembles an Enderman. Its head is similar to an Enderman's, but it is slightly elongated and has a more toothy mouth. It has six tendril-like appendages attached to its torso, which also give the Heart of Ender the ability to crawl. It also appears to fade out near its bottom, where the Arch-Illager is preserved with The Orb of Dominance inside.

The Heart of Ender has 4 different attacks. The first three are used in order, while the fourth is used between each attack. Its attacks are the most powerful in the game, capable of draining the player's health pool within a second.

The Heart of Ender leans back and spits out a cluster of small purple fireballs from its mouth. When a fireball touches the ground, it explodes in a small radius, leaving behind purple flames that damage (158 damage per second on Default) players on contact.

The Heart of Ender raises up and fires 4 purple beams from its stomach in a plus formation, which spin clockwise, dealing massive damage (230 damage per second on Default) on contact. It is it's most powerful attack.

In between the above attacks, the Heart of Ender sometimes "crawls" around the arena, leaving a trail of a black, cloud-like substance behind it, which deals light damage (15 damage per second on Default) to the players on contact.