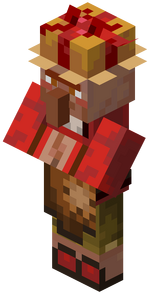 The Gift Wrapper is a merchant that appears in Camp that allows players to trade with each other.

The Gift Wrapper is a rather jolly-looking and colorful merchant, this is seen as the merchant is seen doing an idle happy jig in his stall. It is seen wearing a red suit with black stripes near its sleeves, underneath the suit is a red cloth, making its outfit reminiscent of a tuxedo. It also wears a brown apron, with a white patch sewn into it. It also wears olive pants and red shoes with black outlines. It lastly wears a present-shaped hat, with yellow wrapping and a red ribbon. Unlike normal Villagers, this merchant possesses orange eyes and an light auburn-colored monobrow.

The Gift Wrapper makes it possible to gift items to other players inside your camp.[1] To unlock the Gift Wrapper, the player must find and free it in a specific location inside of Soggy Swamp.

The Gift Wrapper costs 150 Emeralds, regardless of either player's power level. The received item has its power level re-rolled based on the recipients recommended difficulty. Its enchantments are also removed, while the offered enchantments will remain the same, and any spent enchantment points will be granted back to the original owner. The item will also be given a "Gifted" tag, and it cannot be re-gifted.