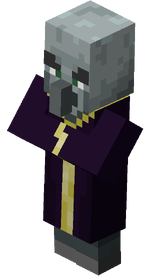 The Evoker is an illager and a miniboss found in Minecraft Dungeons. It appears frequently on lower difficulties and appears as a boss in Pumpkin Pastures and sometimes in Colossal Rampart. It even spawns in levels where illagers are not normally found like the Desert Temple and the Lower Temple. When spawned, a music soundtrack plays.

In default mode, the evoker first appears in Pumpkin Pastures as a miniboss. At the climax of the level, as the final wave, the Arch-Illager summons an evoker, this time as a boss. In every non-DLC level, the evoker has the potential to appear in every level as a miniboss, depending on the difficulty.

The Evoker has two attacks. It starts by summoning a stream of fangs then calls in a group of vexes. While not attacking, it attempts to stay a certain distance from the players by running.

The Evoker raises its hands, enveloped in a yellow aura, then lowers them, summoning a stream of fangs out of the ground to hurt approaching players by snapping shut. The fangs appear in one of the three formations. The first is a line of 7 fangs from the Evoker towards the targeted player, the second is a circle of 12 fangs around the Evoker, and the third is simply fangs scattered around the Evoker. This is its most powerful attack.

The Evoker raises its hands, enveloped in a purple aura, summoning 4 vexes in a circle around it.

In the Novel[1] and Archie's Origin, two Evokers were confirmed to have their real name: