This page would benefit from the addition of isometric renders.
Please remove this notice once you've added suitable isometric renders to the article.
The specific instructions are: Needs more models. This is the straight model. Enchanter closes its hands like evoker when it idles. See Gallery.

This article is a work in progress.
Please help in the creation of this article by expanding or improving it.
The talk page may contain suggestions.
Enchanter 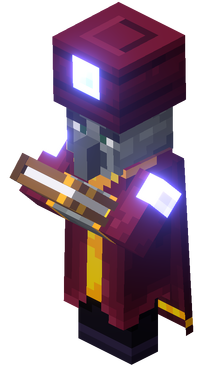 Enchanters are illagers and hostile mobs that enchant other hostile mobs making them stronger and more dangerous, found in many levels in Minecraft Dungeons.

Enchanters wear a wine-colored robe, similar to the Evoker, but with more prominent gold stripes, diamond buttons on its shoulders and gold lines near the end of its sleeves, a turban-like hat with a diamond on it, and a cape with a golden outline at its end. It carries a tome in which it uses it to enchant nearby mobs and control villagers in their hostage and slave operations. It closes its hands like the Evoker and Illusioner when idle.

Enchanters enchant other hostile mobs buffing many of their stats. They shoot a magical beam to link one mob at a time, ending up being able to enchant up to two mobs at a time. Both mobs involved in the enchantment must be alive and near each other for the enchantment to be sustained; if the Enchanter is killed or if the enchanted mob goes too far away from the Enchanter, the enchantment ends and the mob returns to normal. If the player gets too close to one, it hits with its book, dealing minor damage.

Issues relating to "Enchanter" are maintained on the bug tracker. Report issues there.