The logo for Creeping Winter.

The Creeping Winter is set in an as-of-yet unnamed snowy island. The island contains a large fortress (the Lone Fortress) and villages dotted around the land. To the north is a large iceberg and a long river that flows across the majority of the island. Many Spruce trees grow throughout the island.

The following is included in this DLC pack. There is also a function where if the player falls into Icy Water, they will have to break an ice block surrounding themselves. 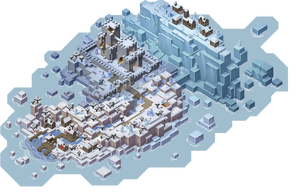 The island on which Creeping Winter takes place.