This Minecraft Dungeons article is a stub.
You can help by expanding it.
Blacksmith 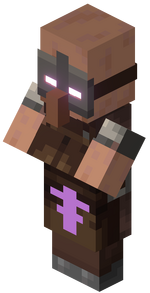 The Blacksmith is a merchant that can be used to upgrade the player's items with emeralds.

The Blacksmith appears similar to the base game's armorer villager, however its eyes are bright purple instead of green, its metal mask is now covering its eyes, and its apron has a bright purple pattern in the middle. It also does not have sleeves.

The blacksmith is able to upgrade items, the player must sacrifice their item to the Blacksmith. After completing three missions, the player gets the upgraded item. The power level of the upgraded item will be determined by the difficulty of the three missions the player completed whilst being upgraded, while its rarity remains unchanged. Although all enchantments on the item are removed, the choices of available enchantments will be the same as those of the original item.

To unlock the Blacksmith, you must find and free him in a specific location inside of Redstone Mines.

Prior to the Creeping Winter update, the Blacksmith used to give the player random gear with power level around the current power level of the player, in exchange for emeralds.