You can help by expanding it.
For the normal Minecraft mob, see Bee.
Bee 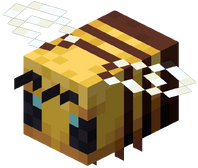 Bees are mobs that are summoned when a Buzzynest is placed, when a player wears Beenest Armor/Beehive Armor or any weapon or armor enchanted with Tumblebee or Busy Bee found in Minecraft Dungeons.

Upon being summoned, they will attack nearby hostile mobs with their stingers. Unlike their normal counterparts, they don't lose their stinger when stinging, which makes them live longer. But they will still die after a short time, even if they didn't attack any enemies. Each bee lasts up to 30 seconds.