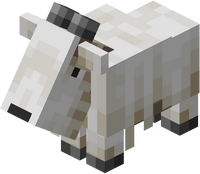 The Baby Goat is a pet mob in Minecraft Dungeons obtained through the Howling Peaks DLC or the Season Pass. It is purely cosmetic and does not attack enemies.

The Baby Goat is a juvenile form of the goat. Unlike baby goats in the base game, they have a unique model and body shape, where they are incredibly small and possess a smaller head and body, it also posesses small horns.