This article is a work in progress.
Please help in the creation of this article by expanding or improving it.
The talk page may contain suggestions.
Arctic Fox Armor 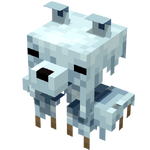 The Arctic Fox Armor is a unique armor set in Minecraft Dungeons. It is identical to Fox Armor apart from looks.

The Arctic Fox Armor was obtainable in the Chills and Thrills Seasonal Trials. It can now only be obtained through the Gift Wrapper from other players who have it.