This article is a work in progress.
Please help in the creation of this article by expanding or improving it.
The talk page may contain suggestions.
Notes:
Arch-Illager (Archie) 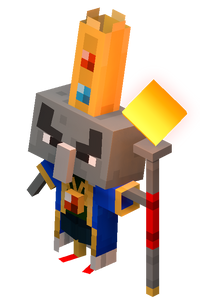 The Arch-Illager known by his birth name as Archie[1], is the main antagonist of Minecraft Dungeons. He is the first leader of the Illagers in the game, and is the keeper of the Orb of Dominance.

Before the events of the game, Archie was an exile from his Illager family, repeatedly searching for a village to call home, only for the Villagers to reject him, after getting in a scuffle with 5 heroes. He was seen being driven out of a village in Squid Coast in the opening cutscene of the cave.

Eventually, Archie stumbled upon a mountain cave containing the Orb of Dominance. The orb promised to him power if he did as it said. Thus, Archie grabbed the Orb and became corrupted by it, ascending to the title of the Arch-Illager and gaining immense power over his people. He then used his army of Illagers to raid the villages that shunned him, taking their Villagers as slaves.

The player(s) would then make it their mission to stop the Arch-Illager.

During his reign, he would collaborate with the evil Witches of Soggy Swamp to obtain large potion supplies. He would also develop the Redstone Mines to use his Villager slaves to mine redstone, and create the Fiery Forge to turn the redstone into Redstone Golems and Redstone Monstrosities to enforce his rule. The Arch-Illager would also start a search to find the Desert Temple and take the Nameless One's staff to gain the ability to summon an undead army. Each of these plans, however, would be foiled by the players.

Additionally, the Arch-Illager repeatedly appears in the game to summon Illagers to attack the players, which occurs less often as the game progresses.

After the players finally reach him on the highest point of his castle, the Arch-Illager fights the player(s) himself. After having been heavily wounded, Archie is sucked towards the Orb of Dominance, which uses him to manifest the Heart of Ender. Once even more damage has been done to Archie, the Heart of Ender dissipates, rendering the Orb of Dominance extremely unstable.

The Arch-Illager has three attacks. If a target comes within melee range of the Arch-Illager, he will begin rapidly teleporting around the arena and firing energy blasts after each teleport. His health pool is the 2nd lowest of any boss in the game, although this is mitigated by the deadly Heart of Ender battle that takes place afterwards.

Since he is not much of a warrior, the Arch-Illager summons a group of Illagers to assist him, usually a ring of 10 to 20 Vindicators around the player or a line of 20 Pillagers through the center of the arena, however, he will occasionally spawn a single Redstone Golem instead. Unlike the Vindicators and Pillagers, the Redstone Golem does not despawn once the Arch-Illager is defeated. While this attack is used sparingly, it is his most powerful attack.

The Arch-Illager fires 3 purple energy blasts in a horizontal swath towards a random player. Deals a small amount of damage if it hits (16 damage per energy blast on Default). Used extremely often.

The Arch-Illager can enchant hostile mobs in the same way that the Enchanter does.

Appear in other maps[edit]

This page would benefit from the addition of more sounds.
Please remove this notice once you've added suitable sounds to the article. The specific instructions are: sounds without background noise; more sounds

The Arch-Illager was known as Archie at first, and lived orphaned in a Woodland Mansion with their Leader being an Evoker named Walda. An Evoker named Thord was Archie's bully.

What type of Illager he was is unknown, since he had no experience with magic or combat. He was banished from his tribe after being blamed for causing a hero named Karl destroying a raid party he was forced to join. He very quickly fled to the nearest village, and while most of the villagers distrusted him, a villager named Yumi was kind enough to take him in as her own, before he was forced to flee again.

When he found the Orb of Dominance, it repeatedly told him it was Archie's destiny to rule the world, although he denied this. Archie would unite all the Illager tribes under his rule, taking the title of The Arch-Illager in the process. Eventually, the Orb fully took control of his mind and led him to take revenge on the villagers and the heroes of the world. [more information needed]

Issues relating to "Arch-Illager" are maintained on the bug tracker. Report issues there.