From Minecraft Wiki
Jump to: navigation, search
This article is about the action/adventure RPG. For the naturally generated structure in Minecraft, see Dungeon.

This article needs to be updated.
Please update this article to reflect recent updates or newly available information.
Minecraft Dungeons 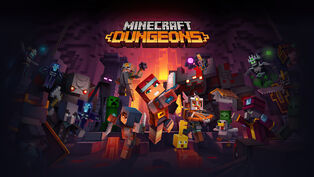 The game supports up to four players and features various new weapons, items, and mobs, as well as a variety of environments to explore and an overarching quest that sees players face off against a main antagonist, called the Arch-Illager.

The game has specific quests and locations, along with procedurally generated elements.[16] The player is not restricted to one class, and can pick up more armor or weapons and use them. Players do not build or mine because the game is focused on action/adventure. The game takes place both above ground and below. Players can re-play levels they have previously beaten. There is a camp "hub world" that takes place in part of the tutorial level, Squid Coast. Levels are procedurally generated, and Mojang was considering using world seeds.[17]

Players can choose their avatar from a variety of skins provided, with more to come as paid DLC. Character creator skins and skins purchased in vanilla Minecraft are not available for use in Dungeons.

The Character is the person that the user controls in the game. When creating a character, the user can choose a cosmetic skin that they can use throughout the game (Note that it is also possible to change the skin at any time on the character select screen).

When creating a character all loot, levels, and progress gained stays only on that character and does not carry over into other characters the user creates.

When starting up the game for the first time with a new character, the player begins at Squid Coast. They then progress through the other locations, such as the Creeper Woods, until they reach the final level of the game, Obsidian Pinnacle. Sometimes a location can generate a room that allows access to a secret location, such as Creepy Crypt or Arch Haven. Other levels can be accessed by proceeding through the levels normally, such as Pumpkin Pastures, Redstone Mines, and Cacti Canyon. Most of the locations and the main story takes place on the main island. Some locations are available only through DLC packs, notably Jungle Awakens and Creeping Winter.

Weapons are tools and items that can be used to damage entities with either melee or ranged attacks.

Armor is used to protect the player from damage and provide health boosts.

Artifacts are objects that the player can use to gain a significant power-up, damage foes, or heal allies.

Mobs in Minecraft Dungeons are generally hostile and attempt to destroy the player. The only exceptions are the pig, key golem, sheep, cow, ocelot, panda, rabbit and target dummy, and mobs summoned by players. There is also one neutral mob that will only attack when the player attacks it first, that is the polar bear.

There are three types of enemies the protagonist fights in the game: Mobs, mini bosses, and bosses.

Killing these enemies gives the player experience and they often drop emeralds, consumables, and items.

Minecraft Dungeons is set in the same universe as Minecraft.[3] Unlike Minecraft, which is a sandbox, the game features a linear, story-driven campaign, and cutscenes. The opening cutscene tells the story of a homeless Illager named Archie, who was rejected by all those who met. One day, he stumbled upon a powerful artifact known as the "Orb of Dominance," which granted him great powers but also corrupted him. The power-hungry "Arch-Illager" then sought vengeance on all those who wronged him, and soon subjugated the world with his new army, raiding villages, forcing villagers to work as slave labor, and leaving only chaos behind. It's now up to the player to stand up against the Arch-Illager's tyranny and become a hero in order to defeat him and save the world.[18]

The player explores various locations in their quest to stop the Arch-Illager, fighting his army and completing quests in order to pass on to the next level. Ultimately, they face the Arch-Illager in his castle, defeating him and shattering the Orb of Dominance in the process, which frees Archie from its influence. Afterward, they show kindness to Archie, much to his surprise, and together they celebrate that evil has been defeated and the world saved, though the Orb is later shown to be rebuilding itself.

The Jungle Awakens DLC continues with this story, with one of the orb fragments corrupting a jungle island. The player manages to destroy the shard and frees the jungle.

The Creeping Winter DLC also continues with the story with another orb fragment corrupting an island, covering it in an eternal winter. The player destroys the shard and rids the island of its winter.

The game was announced at MINECON Earth 2018.[16] It appears as a visually enhanced version of the base Minecraft game, but has a different gameplay style.[19] The game is inspired by classic dungeon crawlers.[3] On September 17, 2019, Double Eleven announced that they are assisting Mojang Studios and Xbox Game Studios with development, particularly with multiplayer and the console versions.[20]

Minecraft Dungeons: The Rise of the Arch-Illager[edit]

Main article: Minecraft Dungeons: The Rise of the Arch-Illager

Minecraft Dungeons: The Rise of the Arch-Illager is an novel by American author Matt Forbeck. It was published by Del Rey Books on July 7, 2020.