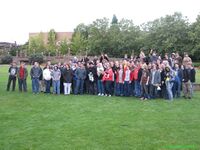 Notch with his fans at MinecraftCon 2010.

MinecraftCon 2010 was a spontaneous gathering of Minecraft fans on August 31, 2010 in Bellevue, Washington. It was conceived by Notch after expressing in a blog post[1] several requests for a meet-up by players and had called on the community to organize one with no specific choice of venue. While Notch had labeled it "Minecraftcon 2010", it is a bit of a misnomer as it implies a formal convention not unlike that of a typical gaming or anime convention. This thread on the Minecraft Forums was an unofficial organization point for the convention, complete with YouTube videos and pictures afterwards.

More than fifty people had turned up at the gathering, including one in a full body creeper costume,[2] in which Notch took a cautious interest. 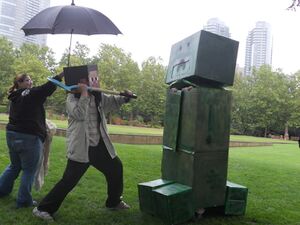 MINECON 2010 was a gathering of Minecraft fans on a Minecraft Classic server.[3] This thread on the Minecraft Forums was an unofficial organization point for the Con. There was a spleef tournament, a building competition, and an obstacle course race. (There was also initially going to be a griefing competition, but it was cancelled.) There was also a signature wall that 167 people signed, including Notch. Notch also confirmed Herobrine would be in the game, probably in a Seecret Friday update. But that has never happened and has decided against it ever since.[4]