On August 20, 2018, Mojang Studios announced that it would bring Education Edition to iPad in Autumn 2018.[3] Microsoft stated that licensed users would be able to play starting in September.[4] It was released to the App Store on September 6, 2018.

On March 27, 2019, it was announced that the Education Edition would be operated by JD.com in China.[5] 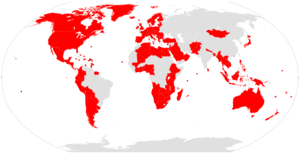