From Minecraft Wiki
Jump to: navigation, search
Minecart with Chest

Example of loot in a minecart with chest in a mineshaft.

Minecarts with chests cannot be retrieved by attacking them, as they just drop a minecart and a chest plus its contents. Still, they are renewable; the player can simply recraft them.

Minecarts with chests can be placed by using its item on a rail.

Chest minecarts' contents can be accessed by pressing Use Item button on them. The interaction makes no sounds and the chest does not show the opening or closing animation, unlike regular chests.

Minecarts with chests are also able to interact with hoppers. Hoppers can take items out from the minecart chest if they are below the track as the cart rolls over it or put them in if the cart rolls under a downward facing hopper.

Opening or dismantling a minecart with chest angers piglins.

When on top of Detector Rails, nearby Redstone Comparators will give redstone signals that will get stronger as the minecart with chest gets more full

Minecarts with chests have entity data associated with them that contain various properties of the entity. 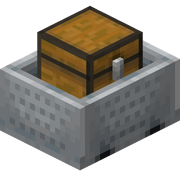 The Minecart models in the Bedrock Edition were north or south on the sides. In the latest version, the front and rear sides are north or south. But the absolute orientation of the chest was not changed.
This section is missing information about In bedrock edition 1.16.100 it seems that chests in minecarts face sideways instead of forward - when was this changed?.
Please expand the section to include this information. Further details may exist on the talk page.

Issues relating to "Minecart with Chest" are maintained on the bug tracker. Report issues there.