From Minecraft Wiki
Jump to: navigation, search
This article is about the rideable minecart. For the Minecraft Dungeons entity, see MCD:Minecart. For other kinds of minecart, see Minecart (disambiguation).
Not to be confused with Minecraft.
Minecart

A minecart is a train-like vehicle entity that runs on rails.

Minecarts can be retrieved by attacking them for some time. Minecarts can also be retrieved with one attack from a pickaxe provided the player's attack cooldown is reset. A minecart is also destroyed if it makes contact with a cactus, or if shot with a bow and arrow.

Minecarts with chests, with hoppers, with furnaces‌[Java Edition only], and with TNT each drop 1 minecart & 1 chest, hopper, furnace, or TNT, respectively. Minecarts with TNT that are detonated do not drop; the minecart is destroyed in the blast.

Minecarts with command blocks and Minecarts with spawners‌[Java Edition only] can be given to the player only with the /give command. Each drop 1 minecart when broken. 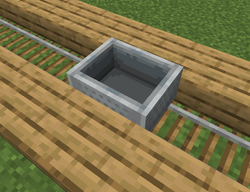 A rideable minecart on rails surrounded by wood slabs

A minecart can be placed in the same manner as most blocks but can be placed only on top of a rail. Once placed, it may be derailed by pushing it off the end of the track. After this, it can be railed again by placing a rail directly below it or pushing it onto a track. 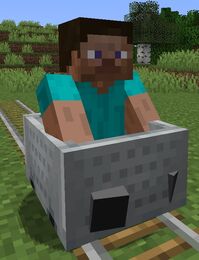 Minecarts can be ridden by pressing the "use" control on them. Once inside, an external impulse may be needed to make the minecart start moving. The player can slowly move the minecart forward while riding it, by pressing forward. If a mob walks in front of an empty minecart, it is pulled into the cart.

Players can exit the minecart by pressing sneak, however, if there is only one block of headroom above the cart, the player takes 1

of suffocation damage. When a minecart is exited, it searches for an adjacent or diagonal 2×2×3 area to put the player 1.5 blocks away from the cart. If none are available, the player is deposited directly above the minecart. Consequently, the player falls inside the minecart.

After rolling off of the end of a track, a minecart can be pushed around on open blocks. If a minecart is pushed onto or falls onto tracks, it "snaps" to those tracks. When riding a minecart, if the minecart lands on a rail, the player does not take any fall damage.

Unlike with beds, there is no message above the hotbar for attempting to enter a fully occupied minecart.[1]

Anything in the way of the minecart brings it to a stop. Once a minecart has left the track, it rapidly decelerates within one or two blocks. When mobs touch a minecart, they affect it in the same way a player would, i.e. mobs that move up against a still cart set it in motion.

If a minecart is moving fast enough, it can skip across one block without a track and reattach to track on the other side, at significantly reduced energy and speed. A minecart's hitbox can skip turns if the minecart is boosted using enough powered rails.[3]

In Java Edition, two or more minecarts can be merged by pushing them into each other so that they overlap. Merged minecarts move as a collective, like a train, and can be useful for long-distance transport.

Distance traveled by empty carts starting at a downwards slope[edit]

This table shows the distance traveled by an unoccupied minecart on a downward slope, with a boost (or no boost). The most efficient way is to use only 1 boost at the bottom of the incline on the flat surface. Using 2 increases distance by about 20% or 1.5 blocks. All distance trends based on the height seem to be logarithmic. The carts started from rest, on a slope Height blocks up.

Minecarts are about the same size as a block (1×1). Because of this, a ladder, door or trapdoor prevents it from falling down a 1×1 hole.

Carts on rails also ignore collision in certain situations. A cart traveling uphill, downhill, or on a curve with a block placed in front of it, goes through the block.[4]

A player or mob riding in a minecart does not collide with or suffocate in any transparent blocks but suffocates inside opaque blocks.

Minecarts are destroyed in contact of lava or fire.

Minecart shaking due to being on top of an activator rail.

Most mobs can ride minecarts, but only some types of mobs can control them. Mobs cannot exit the minecart unless the minecart is destroyed or moves onto an active activator rail. Endermen therefore are unable to teleport out of minecarts.

A mob can ride a minecart by pushing the mob onto a minecart, or by the mob moving into the minecart's space. Some mobs are able to nudge minecarts while in them, like players.

The player can bump a medium slime in a minecart, rendering it unable to attack. However, a large slime can still attack.

A spider jockey riding a minecart automatically accelerates the minecart.

When a boat is placed in a minecart‌[Java Edition only], the minecart travels faster on rails, approximately as fast as on powered rails. The movement in the boat minecart is glitchy and moving forward with the W key moves the cart backward relative to the player, and vice versa for moving backward with the S key. The minecart also moves on the rail-less ground at a crawling speed, but it does not float in the water despite being in a boat.

Using this glitch can be far more resource-efficient since the boat minecart can move at the speed of a powered rail track on flat ground and on slopes. Another physics glitch with the boat minecart is the extreme reduction in friction when the minecart is on rails, which is similar to the lack of friction when a boat is riding on ice. This glitch can be done in survival without cheats simply by pushing a minecart into a boat on the track.

Minecarts have entity data associated with them that contain various properties of the entity.

Issues relating to "Minecart" are maintained on the bug tracker. Report issues there.