From Minecraft Wiki
< Anvil(Redirected from Mechanics/Anvil)
Jump to: navigation, search

This article is about the current mechanics. For anvil mechanics prior to 1.8, see Anvil/Mechanics/Before 1.8. 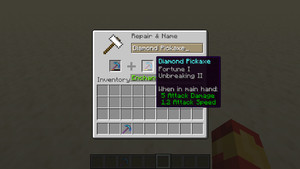 This page explains the mechanics of the anvil. The anvil is primarily used to repair tools, armor, and weapons, which it can do without stripping their enchantments. It can also be used to combine the enchantments of two items, to give an item an individuallyl name, or to crush enemies or other players that walk beneath it while it is falling. All its functions, except for damaging mobs and players, cost experience levels, and some have material costs.

Combining two items also combines the penalties for both items. The penalty on the resulting item is based on the input item with the higher penalty. For example, combining items with penalties 3 and 15 pays a penalty of 18 levels. The item with a penalty of 15 has been worked 4 times prior (24−1=15). Thus the combined item, having been worked 5 times now, now has a penalty of 31 (25-1).

Anything not listed below does not have a unit repair item, and can only be repaired by consuming another instance of itself.