From Minecraft Wiki
Jump to: navigation, search
This article is about the craftable map. For maps showing the locations of certain structures, see Explorer Map. For other uses, see Map (disambiguation).
Not to be confused with World.
Map 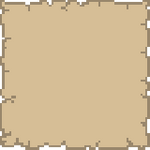 A map is an item used to view explored terrain and mark landmarks.

Novice-level cartographer villagers sell a single empty map for 7 emerald as their trades.

Crafting a map creates an empty map. The map is drawn for the first time when it is held and used (with use item). This map can then be adjusted to different zoom levels. After conversion to a drawn map item, it starts to draw a top-down view of the player's surroundings, with North pointing to the top of the map. A pointed oval pointer indicates the player's position on the map, and moves in real-time as the player moves across the terrain shown on the map. The map does not center on the player when created, rather, the world is broken up into large invisible grid squares, and the map displays the area of whichever grid square it is in when it is first used.[1] For example, if a player uses a new map in a certain grid square, and then moves a distance away and uses another fresh map but is still within the same grid square, both maps appear identical. To make a map that is not identical to the first one, the player would have to move outside of the edges of the first map (because then they would be in a new grid square). This way, no two maps of the same size can ever partially overlap and every map can display only a fixed area.

To record the world on a map, that specific map must be held in the player's hands while the player moves around the world. The world is recorded as-is during exploration, meaning that if the world is modified, a player must revisit the area while holding the map to update the map's view. Maps can also be cloned. If a player holds a map whose clone is on display in an item frame, then that map updates while holding its clone.

When the player leaves the area shown on a specific map, the player pointer transforms into a white dot on that map. The marker shrinks to a smaller white dot if the player is far from the map's center: the radius is 320 blocks per scale factor. The dot moves along the edge of the map to show the relative location of the player. However in Bedrock Edition, the pointer remains as an arrow but shrinks until the player is near the area shown in the map.

While maps in the Nether work, the bedrock ceiling results in nothing more than a red-and-grey pattern. The only useful function is finding where the player is in relation to placed framed maps, which show as green pointers. Additionally, the player pointer rapidly spins and is not a good indicator of direction. Placing a banner in the Nether still shows it on the map as usual. Having a smaller map image while riding a strider in the Nether can help one to see one's footing while traveling over lava.

A player can make a large piece of pixel art (128x128) facing upward, center a map on it, and place that map in an item frame to create a custom picture. Locking is recommended. See Map item format#Map Pixel Art for details on the techniques.

Maps consist of square pixels arranged like pixels in a 128×128 square pattern, with each pixel representing a square portion of land. Generally, the color of a map pixel matches the color of the most common opaque block in the corresponding area, as seen from the sky. 'Minority blocks' in the target area have no effect on the color of the pixel, thus small features tend to be undetectable on zoomed-out maps.

Maps also show ground up to about 15 blocks below the surface of the water in oceans as slightly lighter blue, to show where the ground rises. This is not true with land above water. Higher elevations in the world mean lighter colors on the map. The map records the surface even as the player moves below the surface.

In Bedrock Edition, a map can be crafted with or without this marker, and a map without a position marker can add one later by adding a compass to the map. When a map is crafted without a compass, it's simply called an "empty map", but when crafted with a compass, it's called an "empty locator map". The marker also turns red if the player enters the nether with an overworld map and show the player's overworld location relative to the nether location. A map created in the End has a purple marker showing the player's location. If an Overworld map is used in the End, a magenta dot appears on the player's spawn point.

A blank map can not be zoomed out. A map has to have something already marked on it for the zooming to be possible.

The zoom functions from the time the map is centered (zoom level 0) to the largest size (zoom level 4).

Maps are always aligned to a grid at all zoom levels. That means zooming out any different map in a specific area covered by that map always has the same center. Zooming in does not retain the same center, but retains the same east and south (right and bottom) border. As such, maps are aligned by map width (1024 blocks for a level 3 maps) minus 64. A level 3 map generated at spawn covers X and Z coordinates from -64 to 959. All maps generated in this area zoom out to the same coordinates, guaranteeing that they are always 'aligned' on a map wall. For a zoomed out map to cover a new area, it must start with a base (level 0) map that is in that area.

The parts of the world that have already been explored and mapped are copied, and newly explored areas appear on both instances. If one of the maps is later zoomed out, then both maps lose their connection and function as completely separate maps that have to be individually filled by exploring.

It doesn't matter if the map to be cloned is at a higher zoom level (made of more paper) than the blank map. Upon copying the map, both resulting maps have the same magnification as the starting map.

If a map is mounted on an item frame and is within the area it depicts, the mounted map will display its current location with a green indicator that's rotated to match its orientation. 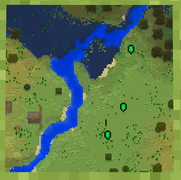 In Bedrock Edition this is what a map lying on an item frame looks like, while showing markers.

In Bedrock Edition the player can place copies of locator maps in item frames in order to create a land mark. The marker is a green dot that resembles the shape of the player's marker, but in green color. The position the marker points at depends on the direction the item frame is facing. It is worth noting that the markers work only on copies of the same map. Other maps of the same area do not show the existing markers that the player(s) had placed.

This page would benefit from the addition of more images.
Please remove this notice once you've added suitable images to the article.
The specific instructions are: MC-72962