From Minecraft Wiki
(Redirected from MINECON 2019)
Jump to: navigation, search

MINECON Live 2019 was a livestream that took place on September 28, 2019, at 16:00 UTC.[1] It featured Masuo (MasuoTV), Mariel (Marielitai Gaming), Shelby Graces (Shubble), and Scott (Dangthatsalongname) as the co-hosts of the show.[2] It was the last Minecon, as it was then replaced by Minecraft Festival and Minecraft Live.

The live stream can be found here.

There were a total of six panels; one panel during the show with Minecraft developers and five community panels after the show.[4]

Diversity 3: Created for The Community[edit]

How We Craft: Secrets of the Marketplace Partners[edit] 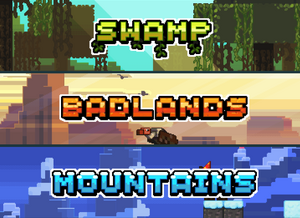 The three options for the biome vote: badlands, swamp and mountains.

During the livestream, viewers could vote for one of three biomes that will be updated. The biome with the highest vote will get new features, such as terrain changes and new mobs, in the next major update. The winner, Mountains, will be getting snowier snow, goats, and new mountain terrain generation.[5] The two other biomes will also get new features, but at a later date.[6] Mountains were voted as the first biome to be updated.[7]

Tumbleweeds, vultures, and a new type of flowery cactus are planned to be added. Badlands was voted as the last biome to be updated in the first poll.[8]

Treasure boats, frogs, and mangrove trees are planned to be added.[9] Swamp was voted as the second biome to be updated in the second poll.[7]

Snowier snow, goats, stone with snow on top (like with grass) and improved mountain terrain generation are planned to be added. Mountains were voted as the first biome to be updated in the final poll.[7]