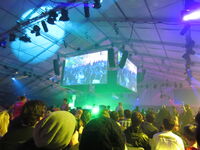 The stage where the opening and closing ceremonies, as well as certain panels, were held.

MINECON 2012 was held in Disneyland Paris from November 24 to 25. The convention was attended by 4,500 people - approximately the same amount as the previous year.[1] The Redstone Update was announced by the core Minecraft development team in a keynote held there. The entirety of the convention was officially live streamed by GameSpot, who later uploaded some of the content to their YouTube channel.[2][3]
Official Tumblr: http://mineconparis.tumblr.com/.

The song that was embedded in the 2012 site.

On April 9, 2012, Lydia Winters confirmed that MINECON 2012 would occur in Europe. She also announced that details would become clear in the coming weeks. On July 18, 2012 she posted on the Mojang website that in the following week a video would go up saying where MINECON 2012 would be.[4] On August 2, 2012, Mojang officially announced through a promotional video on YouTube that MINECON 2012 would be held in Disneyland Paris from November 24 - 25th. On August 23, 2012 the official MINECON site was updated to reflect 2012's convention. Ticket sales and hotel registration opened on September 14, 2012 with tickets quickly being sold out soon after release.

As with the previous year, attendees of MINECON 2012 received an exclusive cape. On October 8, 2012, it was confirmed by Junkboy that the cape design for MINECON 2012 was finished and they were taking about 2 weeks to implement a button to turn it on and off.[5] On November 1, Mollstam tweeted that the cape will be available when they finish the cape selection system.[6] As such, minecraft.net now offers the ability for users who attended both conventions to switch between their 2011 and 2012 capes.