Lying is a body position adopted by the player and some other mobs under certain circumstances.

All mobs can be made to sleep in beds using commands. In addition, multiple mobs can sleep as part of their natural behavior. Also, the players' and mobs' hitboxes reduce to 0.2 blocks when lying.

Players lie down when using a bed. Currently, this is the only way that a player can adopt the lying position. Players cannot move, and cannot use items while doing so, unlike with sitting.

Villagers lie down when using a bed. They can be woken and removed from their bed by either breaking the bed, pushing them out of the bed, attacking them, or pressing use on the bed.

Cats lie, and sleep, on beds whenever their owner is sleeping on one. They emit specific sounds when doing so.

Foxes occasionally lie down and sleep during the day, taking shelter beneath blocks when doing so. Shade is a necessity for sleeping; if a path for direct sunlight is created that lights up a sleeping fox, it immediately wakes and tries to sleep elsewhere. Foxes are currently the only mob to switch to a texture with their eyes shut upon entering their sleeping state. 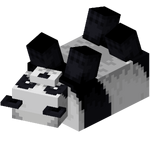 Lazy pandas occasionally lie on their backs. Unlike with other mobs, this is a passive action, which is unrelated to sleeping.

This section would benefit from the addition of more images.
Please remove this notice once you've added suitable images to the article.
The specific instructions are: Baby versions

This section is missing information about more mobs, other history parts and bedrock edition.
Please expand the section to include this information. Further details may exist on the talk page.