From Minecraft Wiki
Jump to: navigation, search
For other uses, see Llama (disambiguation).

It has been suggested that this page be split into Llama and Trader llama. Do not split pages until a consensus has been reached. [discuss]
Reason: This page contains two mobs already. We should split it in sometime.
Llama 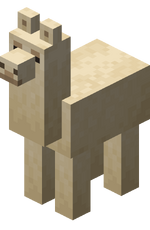 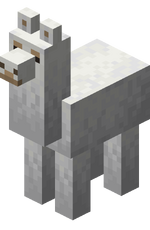 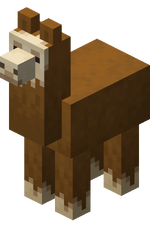 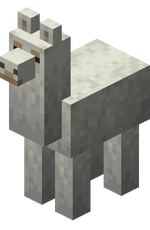 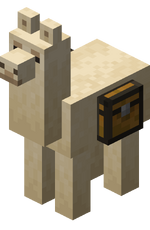 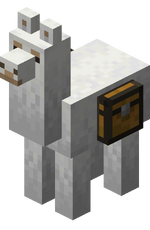 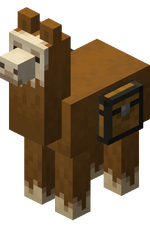 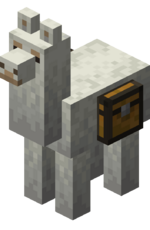 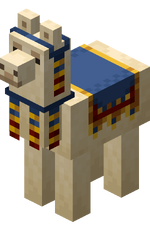 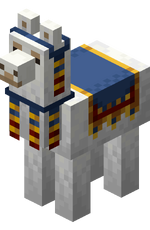 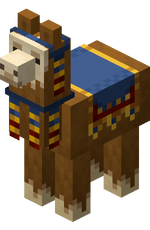 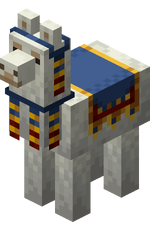 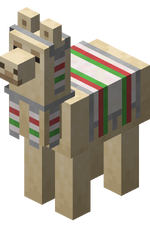 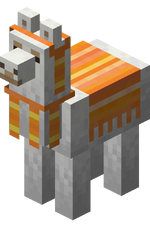 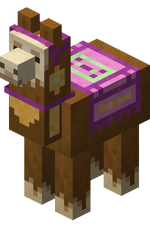 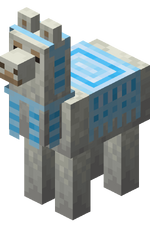 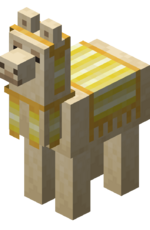 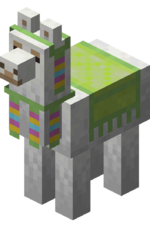 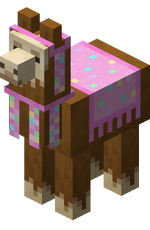 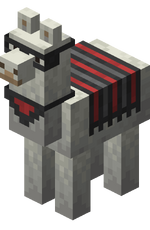 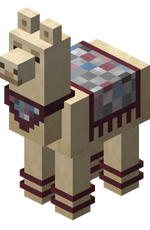 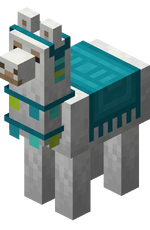 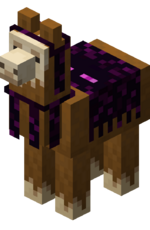 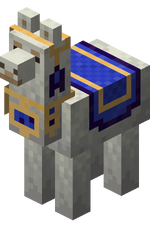 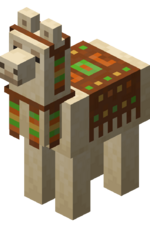 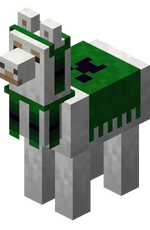 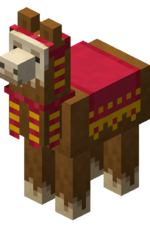 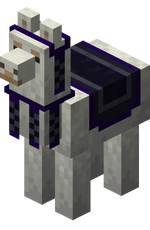 Llamas spawn at light level 7 or above. They naturally spawn in savanna biomes in herds of 4 llamas and in mountains biomes in herds of 4 to 6 llamas. They come in four variants of coat colors: brown, cream, white, gray. Wandering traders always spawn with two leashed trader llamas.

In Bedrock Edition, there is no spawn egg for trader llamas. They always spawn when a wandering trader is spawned using a spawn egg or by using the /summon command, although a trader llama can be summoned using /summon llama ~ ~ ~ minecraft:from_wandering_trader.

Llamas do not accept saddles, so the player can't control one's movement, even when tamed. Thus, leads are the best way to move llamas. Leading a llama actually signals up to ten nearby llamas (both tamed and untamed) to follow each other, forming a caravan. A caravan can have up to nine llamas in it, including the lead, whether it's an adult or a baby. Leashing a second llama forms a caravan of ten more llamas, and there is no intentional limit on the number of llamas following a player.

A llama can be equipped with a chest by right clicking a chest on it once tamed, giving it 3, 6, 9, 12, or 15 slots of inventory space, scaling directly with its Strength NBT (see § Data values below). Once equipped, the chest cannot be retrieved without killing the llama. A llama's potential carry capacity is a number of item slots equal to 3*Strength. 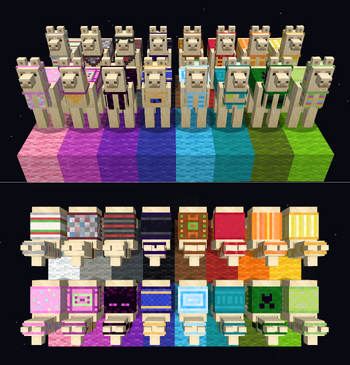 Llamas can be equipped with carpets in their carpet slot (). Each carpet color shows as a different patterned rug on the llama's back. This can be useful for color-coding their storage, similar to dyed shulker boxes.

For the purposes of the /replaceitem command, a llama carries its carpet in the horse.armor slot.

Trader llamas that do not have a carpet wear a blue rug design. It can be replaced with a carpet but not removed. When given carpets, both types of llama look the same.

damage. Sometimes their spit can miss their target and hit another llama, starting a fight within a group of llamas. Additionally, a wandering trader's llamas spit at mobs or players who attack the wandering trader.

Llamas are hostile to wolves and spit without provocation, but they don't attack tamed wolves unless provoked. Wolves are fearful of llamas of strength 4 or 5 and always run away.[1] Wolves flee from weaker llamas less often.

Despite the spitting being a projectile, dying from llama spit still shows the death message "<player> was slain by Trader Llama/Llama."

The spit entity must belong to a llama to do damage, meaning that the spit summoned by commands does no damage. Llama spit can be deflected if hit by the player.‌[Bedrock Edition only]

Llamas can be tamed by repetitively riding them until hearts are displayed, done by pressing use on the llama while holding nothing. Taming success depends on the llama's Temper NBT. Temper is a positive trait, with higher values increasing the chance of successful taming. Llamas begin with a Temper value of 0 and a maximum of 100. When a player rides an untamed llama, a random number from 0 to 99 is chosen. The llama gets tamed successfully if this number is less than the Temper value, otherwise, the Temper is increased by 5 and the player is bucked off. Temper can also be increased by feeding the llama.

Unlike any other tamed animal, tamed llamas still retaliate at players.

Naturally spawned trader llamas are untamed and unrideable while being lead by their wandering trader. If unleashed, they become tamable‌[Java Edition only] or tamed.‌[Bedrock Edition only]

In Java Edition, tamed trader llamas do not despawn.

Tamed llamas can be bred by being fed 1–3 hay bales. Both parents must be tamed before they can breed. Trader llamas cannot breed.‌[Bedrock Edition only]

The offspring takes on the appearance of one parent randomly. Its strength is chosen as a random integer between 1 and the strength of the stronger parent, inclusive. 3% of the time the resulting strength is increased by 1, but it is capped at 5.

A llama's base health (15 to 30 hitpoints) is calculated based on that of its parents, in the same way as a horse's.

Llamas breed in the vicinity if they are on a lead. Although one of the llamas may not respond to being fed right away; they accept a hay bale/bale(s) if needed to breed. This can result in consumption from 1 to 3 hay bales.

Feeding a llama food can alter its behavior, restoring lost health or making a baby grow faster (babies ordinarily take around 20 minutes to mature to adults). The table below lists the effects of the 2 food items llamas accept.

To feed a llama, hold a valid food item and press use while facing the llama. Llamas can be fed only when feeding would have an effect, similar to other animals. If the food is invalid, the player mounts the llama instead.

Llamas have entity data associated with them that contain various properties.

Llama spit have entity data associated with them that contain various properties.