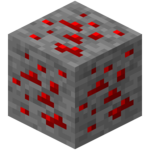 This article is about the ore. For the item, see Redstone Dust. For the powered mineral block, see Block of Redstone. For other topics related to "redstone", see Redstone (disambiguation).

Redstone ore can generate in the Overworld in the form of mineral veins. Redstone ore attempts to generate 8 times per chunk in veins of size 8, from altitudes 0 to 16, in all biomes.

The redstone ore block itself (rather than its redstone drops) can be obtained by mining it with an iron or diamond pickaxe with the Silk Touch enchantment.

Redstone ore produces light (strength 9) and red particles when clicked, updated, or contacted by any mob (exceptions being a sneaking player and armor stands). This effect continues until the redstone ore block receives a block tick (averaging 68.27 seconds). This effect does not actually produce redstone power, but the block changes can be detected with an observer or a block update detector.