From Minecraft Wiki
(Redirected from Lightning bolt)
Jump to: navigation, search
Not to be confused with Lighting. 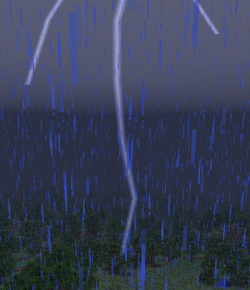 Thunderstorms are a somewhat common and dangerous weather condition.

Thunderstorms are a semi-common temporary, global occurrence[1] that can happen randomly at any time, within the Overworld. The exact type of precipitation during a thunderstorm varies depending on the temperature of the current biome, as well as the current altitude.

Thunderstorms may occur randomly, as rain or snow storms worsen. The average storm lasts 0.5–1 Minecraft day, and there is a 0.5–7.5 day delay between thunderstorms. They can be skipped entirely with the use of a bed, regardless of the time of day. Sleeping in a bed also resets the in-game thunderstorm timer, making a thunderstorm right after sleeping unlikely. This means the best way to wait for a thunderstorm would be to go without sleeping for several days, as sleeping every Minecraft day would minimize the chance of a thunderstorm occurring.

As with rain and snow, the sky is darkened and the sun, moon, and stars are no longer visible. Thunderstorms darken the world, causing light from the sky to decrease to a level of 10 in full daylight (however, brightness is closer to a level 11.5 and is tinted blue). The clouds darken from white to dark gray, although clouds themselves do not precipitate or create lightning. While the sun is not visible during rain, the glow associated with sunrise and sunset is still visible.

Lightning strikes randomly and creates fires where it strikes. Such fires act normally, igniting all flammable materials, detonating TNT, and even activating nether portals. The lightning itself, however, is not destructive and does not destroy blocks. While most fires are extinguished by the rain, areas that block rain can allow the fire to spread, and any netherrack, soul sand, or soul soil lit by lightning is not extinguished by the rain. 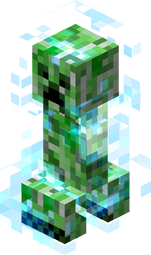 Thunder is a sound event that occurs every time lightning strikes. Every player within the 160 thousand blocks and the same dimension hears the thunder.

This page would benefit from the addition of more sounds.
Please remove this notice once you've added suitable sounds to the article. The specific instructions are: is there a specific sound event tied to skeleton traps? also should we include channelling here?